Climbing our own Mountains 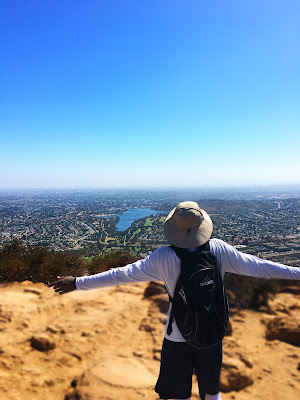 Do you ever have that feeling of overwhelming satisfaction after you accomplish something which you have put an intense amount of time and energy into?  Well, that's exactly how I felt in this photo my friend took of me a couple years ago when I went hiking for the first time.  After what appeared to be hours long of inhaling dust and scaling four-foot rocks, I reached the pinnacle.  And oh was I happy, because that was definitely a workout since this mountain is a three-mile upwards climb.  As I made it to the mountaintop as seen in the picture, I allow my eyes to take in the full view of nature's beauty.  Noticing each crest and rise of the hills as well as a lake amongst the greenery in the distance, gave me essentially a feeling of tranquillity as well as accomplishment.
I said that corny yet true story with the intent of correlating it to how the mountain is representational of each of our individual journey's.
Based on my observations and interactions with many in my generation, I have gleaned a common theme of the belief that everyone's journey is relatively the same.  That is not true whatsoever.  The individual battles that we deal with in our lives are tailor-made for every person, despite there being some similarities in the roads traveled.  The incorporation of social media into this routine of monotonous living has increased this unfulfilling belief that there are play-by-play rules on how to live your life.  This, unfortunately, has shackled people's minds unknowingly, causing them to just follow the crowd without addressing that void in them which causes them to ponder: "There must be more to life than this...".
Non-conformance in today's day in age I find to be very rare due to the theory that categorization of an individual is the route in which we use to "put people in a box".  This unfortunate belief that a person can be defined so easily based upon another's observations, develops an insecure nature in many young people which forces them to have self-doubt.  The inclusion of social media for many, compounds this stigma that the young generation has to look, dress, talk, and think the same way.  Unfortunately, due to their minds being so impressionable and easily influenced by the "bright lights" of social entertainment, they are almost groomed into believing that their individual journey in life, is the same for each of them.  By recognizing that your road is unique and might have some circumstances that can be related to due to shared experiences, a young person can see that conformity is not the only option for them.  Through their eyes being opened to the fact that their own scaling of the mountain will have different debris in comparison to their other friends, as is the literal case with me and my friend on the hiking trip I mentioned earlier, they will get much more substance out of their lives.
The interesting thing about this is that the older generation of people has dealt with this same manner of conformity.  The trendy fashion sense of the times along with the magazine issues which emphasized whatever was going on during the day also targeted these young minds.  However, the difference is that the lack of social technology allowed for many of our older generations to experience life in a more authentic "hands-on" way.  Their understanding of their individual journey's appeared to be more real in comparison to the technological age that my generation lives in today, which allows us to observe these positive experiences through a screen. By not actively interacting, our young generations are receiving a false representation of life that is viewed with an ignorant curiosity which usually draws them towards the distasteful things of the world.
The older generation has already climbed their own unique mountains, are the ones that my generation and those younger should learn from when it comes to scaling their own hills, regardless of how removed they might be technological.  When it comes to life, no matter what age, maturity can be seen through one learning from those who have more experience than they do.  Sometimes just sitting down with a person from the older generation, whether it be a parent or whoever, a younger generational can learn so much which can better guide their journey.  All in all, by learning from each other's generations, and understanding that we do not have to be "carbon copies" of each other in lifestyle and thought process, the new generation will learn how to climb their own mountains of life. Creating more talented interesting individuals who will bring something new to the table because of their own experiences being tailor-made and producing originality.